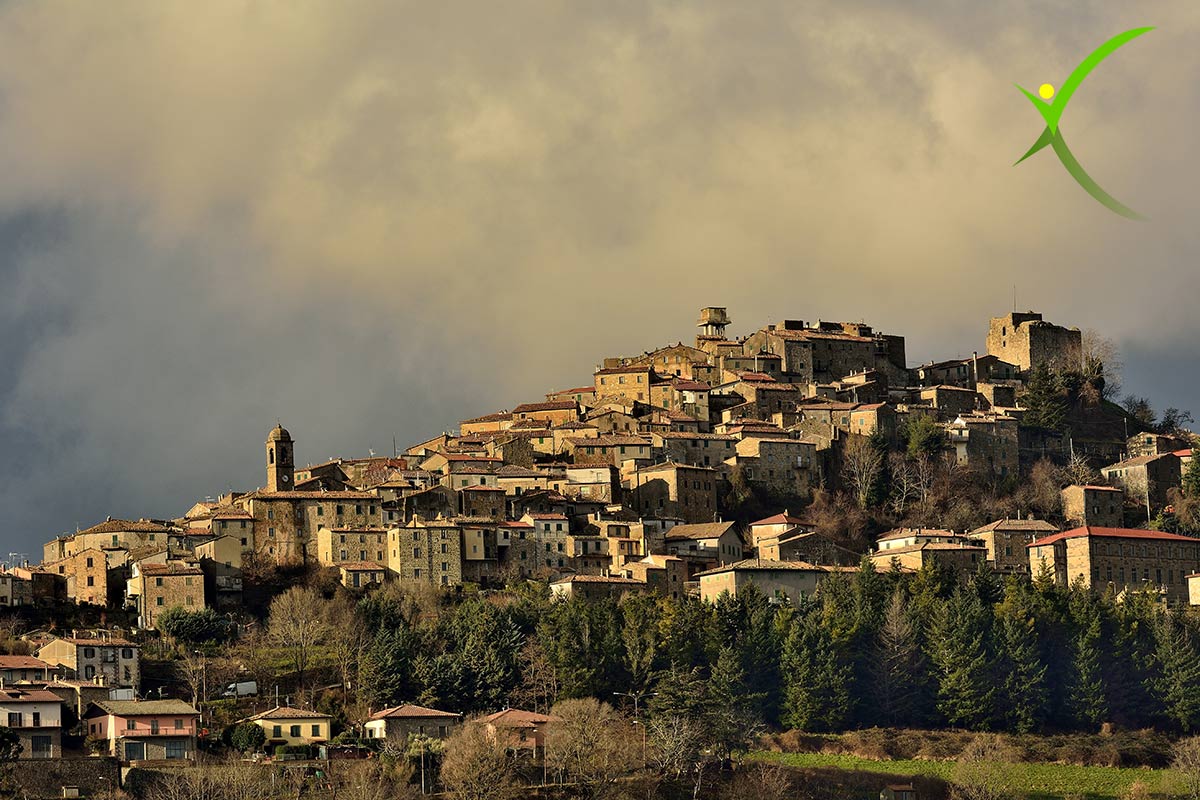 Montelaterone is a village in the municipality of Arcidosso that rises on the slopes of the Amiata on a sandstone mountain overlooking the Ente and Zancona rivers and which caresses the Orcia valleys. An ancient village where time seems to have stopped a few centuries ago.

Medieval walls, narrow and steep streets, ladders and a labyrinth of paths that could make you lose yourself among the various historical reminiscences.
Given the importance of the strategic location of the village, it is not surprising that Montelaterone played a leading role during the Middle Ages. It was the monks
of the Abbey of San Salvatore to raise the first buildings and “Castrum”, in such a way as to allow farmers and woodcutters to have a reference and protection center.
The monks defended themselves from the attacks of the Aldobrandeschi, eager to obtain those lands, but could not do anything against the hegemony of Siena. During the Sienese “control”, the village had a thriving economy. A double wall and a Cassero (called Roccaccia) were created, in order to have the greatest possible protection. Subsequently the lands passed under the Grand Duchy of Tuscany and, finally, were annexed to the municipality of Arcidosso since 1776.

What to see in Montelaterone

From the small village you have breathtaking views of Mount Amiata and the surrounding valleys, especially if you reach the summit, where the remains of the Cassero are located. The atmosphere of the town is rich in history and allows visitors to travel with the mind. The most important religious structures within the town are: the Church of San Clemente and the Chapel of Santa Lucia alle Stiacciaie.

However, there is a place that has an aura of legend in the woods of Montelaterone and Arcidosso, it is the Pieve di Santa Maria a Lamula. It is said that a mule, carrying the statue of the Madonna, knelt down at the point where the Pieve itself rose. The signs of the knees are still visible today. The church was built in 837 by Benedictine monks but was later renovated with Baroque forms in the late 1600s.

However, the ancient splendors of the Middle Ages have disappeared and the historic center has almost become a ghost town. Events have also been reduced over the years. There are some sports competitions, celebrations during the days of Christmas and a very special event: “Night Incantations”. It is a traveling work through the narrow streets of the town where the actors improvise following the plot. The story changes every year and viewers are not given the content of the “piece”, in order to create greater interest.
However, in the village there is the will, the desire and the promises made to grandparents or deceased parents, that everything would have been tried to “save” the country. In fact, the “Il Borgo” Community Cooperative was born, which attempts to revive the territory, people and places in such a way as to recreate a lost social fabric. There are 8 women who have decided to embark on this adventure that we hope will succeed in the best way.

In its charm and its solitude, Montelaterone controls all the valleys below, aware of the fact that fairy tales are born from the will of the people.