For trekking, Monte Amiata has a lot to offer its visitors. In addition to visiting the small villages and neighboring towns, one of the activities that we certainly would like to suggest is a nice walk immersed in greenery, in close contact with the uncontaminated nature that Mount Amiata continues to maintain.
Many are in fact the paths that the tourist can take, both on foot and possibly by bicycle, all marked and clearly visible, to allow everyone, both experts and less experienced, to walk in safety and tranquility.
Below is a list of the trails, which for convenience we will divide based on the difficulty of traveling.

Trail of the Mine

Let’s start with the path of the Mine, which winds around the homonymous place of interest in Abbadia San Salvatore. Just over four kilometers to cover in just over an hour on foot, with a total height difference of about 140 meters, this path will allow everyone to explore the places of the mine.

The path of the Waterfall

Further from the inhabited center of Abbadia San Salvatore, moving towards Arcidosso, an easy-to-follow path is the Waterfall ring, with an elevation gain of just 80 meters and a length of about four kilometers.

Another route classified as easy is the one called Borgo Tepolini, with departure and return to Castel Del Piano. With its eight kilometers in length and a difference in altitude of around 200 meters, the route alternates between asphalted and dirt roads, ranging from white roads to large areas of wine-growing, from chestnut woods to centuries-old olive trees.

Trail of the ski slope

Returning towards Abbadia San Salvatore, another easy route is the cross-country track, with its five kilometers in length and a gradient of just 65 meters. The route, as the name suggests, runs along the track that in winter is used for cross-country skiing. The path can be further divided between Anello Lungo, which will lead the tourist to discover the magnificent Amiata beech-woods, and Anello Corto, a short journey of just two kilometers.

The first route we want to recommend for trekking lovers is the Rigale path, which starts from the provincial road that goes up to Monte Amiata at a height of 1223 meters. Going uphill and crossing numerous ditches, you reach Pian della Pescina. 5 total kilometers to go, and a total height difference of about 330 meters.

We continue with the Sasso De’Merchi path, with a point of departure and arrival at the First Refuge of Monte Amiata.The name of the path takes its name from an incision, still legible today, which in ancient times marked the border between the property of the Cervini counts of Vivo d’Orcia and that of the Macchia Faggeta. The trail is short, about 3 kilometers in total and with a drop of just 100 meters.

Instead, there are almost ten kilometers to go for trekking lovers and not just those who want to explore the Sant’Antonio path. Going along the old road that connected Abbadia San Salvatore to Piancastagnaio you reach the two old farms of Sant’Antonio and della Cipriana, inhabited until the 1950s. From here you descend again towards Abbadia San Salvatore, with a total height difference of 240 meters
GPS Track.

Instead, the path of the Cipriana is a ring, 12 kilometers and a height difference of about 240 meters. Starting from the ancient road connecting Abbadia San Salvatore and Piancastagnaio, one arrives at the Cerro del Tasca farm first and then at the ruins of Montarioso. Continuing to climb, we arrive at the Cipriana locality, and then begin the descent towards Abbadia.
GPS Track.

Starting from the town of Pian della Pescina, the Scalettaia route allows trekking lovers on Mount Amiata to reach the top of the mountain passing through the Prato della Contessa. The final destination is the Sasso di Maremma, where you can see the famous Madonna degli Scouts. Just a kilometer long, but a drop that in some places reaches 150 meters.

The Le Cannucce path starts on a paved road. From the church of San Leonardo at Abbadia San Salvatore, go up towards Grappolini and continue along the Castagna road. Going up further, you can opt for two different routes, both of which go to rejoin the Monte Amiata ring. About 8 kilometers to go and a nice drop of almost 600 meters.

The Mount Amiata Ring is the longest and perhaps most famous path, certainly not to be missed to observe immense forests of beech, fir, oak and chestnut up close. A good 28 kilometers are covered and a vertical drop of about 360 meters

Finally we signal the Primo Rifugio- Macinaie path. It starts, in fact, from the First Refuge Amiatino, and through a slightly uphill and sometimes flat path you reach the locality of Le Macinaie, a perfect place to regenerate a little after the walk. Then continue through the Marsiliana cross-country ski run, where by taking the Canalino track you will begin the descent that will take you back to the starting point. A nice walk of about 8 kilometers and a height difference of about 170 meters.

Let’s now dedicate ourselves to the more experienced, with the three most challenging paths..

Let’s start with the path called Macinaie-Vetta-Cantore. Almost seven kilometers in length, with an elevation gain of almost 400 meters. You can start either from the La Macinaie lawn or from the Cantore lawn, joined by the Marsiliana cross-country track. The summit of Monte Amiata can be reached through the Crocicchio, Canal Grande or Panoramica slopes: a remarkable difference in height, but rewarded by a panorama that will leave you breathless.

A similar drop, but a path of twenty-two kilometers that of Capomacchia. Starting from the Cipriana route, a strenuous climb will lead you to the Capomacchia hut, a refuge that was destined for the guardian of the Macchia Faggeta estate. Arrived here, you can decide to continue towards the Vetta del Monte Amiata or to begin the descent towards Abbadia San Salvatore. If you opt for the second option, the Catarcione refuge will offer you an area equipped for picnics, and still continuing a stop certainly deserves the small church of Ermeta.
GPS Track.

Finally, moving towards Castel Del Piano, the homonymous route will allow you to pass from an area entirely dedicated to the cultivation of chestnut to the splendid beech-woods. Almost twelve kilometers to go, and a height difference of 1121 meters.

We thank for the GPS tracks of some routes mentioned in this article and for the map below the colleagues of the AmiataRunners site where you can find more information on the activity of trekking and sporting activity on Mount Amiata. 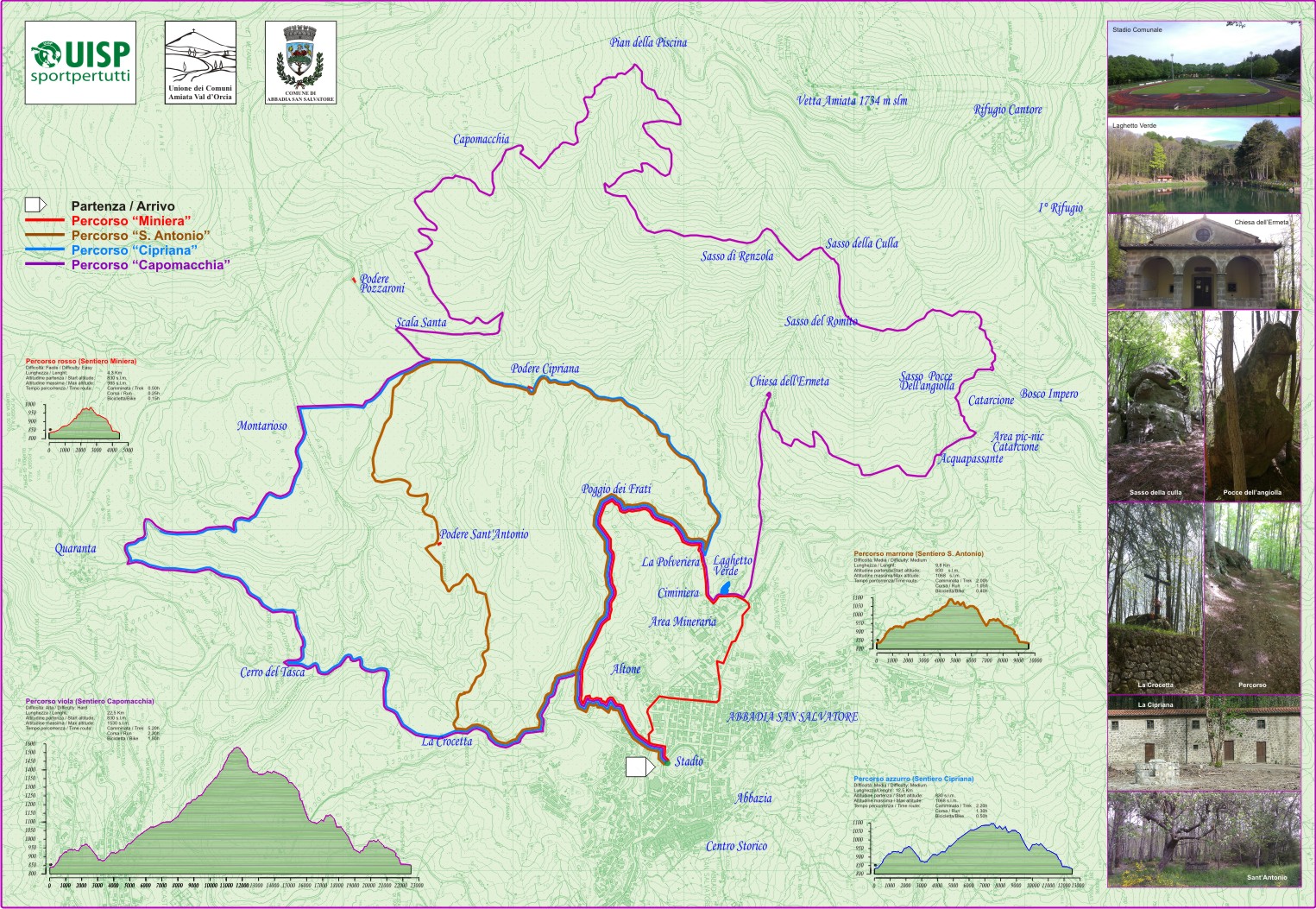