Visit Vivo d’Orcia, the land of the water 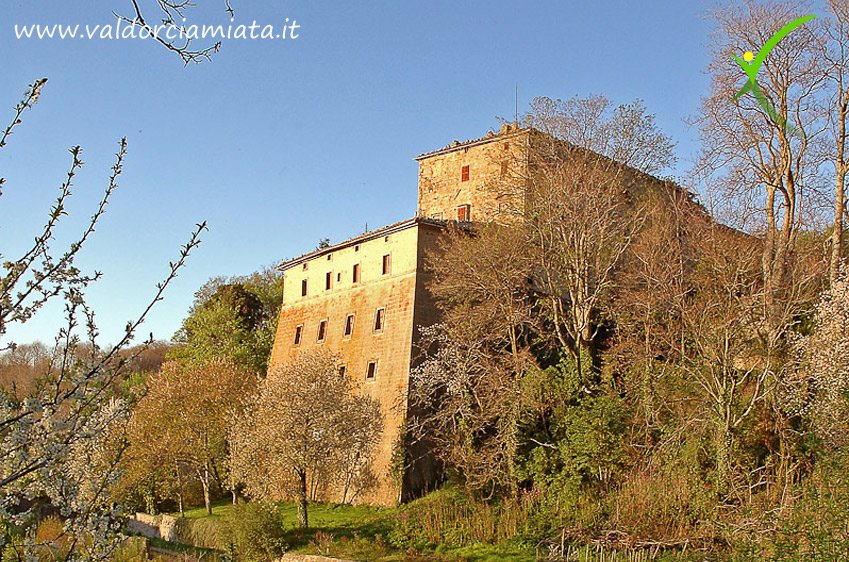 Vivo d’Orcia is a modern mountain village where it is worth shopping just for the fresh air, the wonderful waters and renowned restaurants.

Ancient seat of Hermitage Camaldolese del Vivo was presumably founded around the year 1000. The town underwent a profound transformation in 1538 when it was ceded by Pope Paul III to Cardinal Marcello Cervini who later became new Pope.

The family of Counts Cervini besides building the great sixteen-century castle, a project attributed to Antonio da Sangallo the Younger undertakes an important series of changes exploiting the waters of the stream, giving a new imprint to the economy of the area.

They are so constructed some mills, a copper works, an ironworks, the olive oil production, a mill for the paper production and around 1920 also a hydroelectric power station. Today these factories are now abandoned, covered by dense vegetation of area, but the county still lives.

This palace still inhabited by the descendants of the Cervini family, constantly surprises with its excellent state of conversation and the unimaginable dimensions.

The Church of Saint Marcello is the upper hermitage of the Camaldolese monastery of Vivo d’Orcia, founded at the beginning of the XII century.

The church presents the cultural influences of Romanesque art of the Pisa and Lucca area. Very recognizable facade decoration of arches and columns with motive widespread in Siena, while the crowning of the apse for hanging arches has Lombard influences.

The church has undergone restoration at the beginning of the century.

Vivo d’Orcia, the history of the land of water

The lack of natural water resources, since the XII century impelled the City of Siena to carry out major works to find enough water to citizens ‘needs. This was very good decision since that primarily a Siena, the water that came in the pits mostly from spoils of the fountain Gaia and the fountain Branda was very unhealthy, making disastrous hygienic and sanitary conditions of the urban population.

Due to the sewage infiltration of cesspools, typhus had become an endemic disease and periodically sowed death, especially in districts where arrives, little over than trickle of water to be exploited for all daily uses.

The Ermicciolo source, which flows on the northern slope of Mount Amiata near the village of Vivo d’Orcia, just little over than 1000 meters above sea level, was shown as the first time the only one able to solve the problem of water supply of Siena in 1890.

They made then scientist analysis of Vivo d’Orcia water, comparing them with water that flowed through the spoils of Fontebranda and Fonte Gaia, with aim to evaluate the most suitable.

Negative judgments about the quality of water from these sources were often repeated by scientist, but it came out that due to the low depth of the galleries and the permeability of the surrounding ground, “Both the water of Fontebranda as that of Fonte Gaia, do not correspond to the hygienic requirements of drinking water, healthy and pure“.

On the contrary, the samples taken at the Vivo d’Orcia “sources, “in glass tubes welded to the flame `‘and subjected to“ 4 essays of culture in gelatin in the pipes to Esmarch“, turned about to be perfectly sterile and absolutely free of microorganism, an abundant water of excellent quality“.

At the conclusion of the investigation, the Commission mutually declared that to solve water problems of Siena was necessary to city to ensure at least 40 liters of water per second. They also declared that only the sources of Mount Amiata had an adequate flow rate.

In particular, the most appropriate water was that of Vivo d’Orcia .Thanks to the best conditions of altitude and the location in a territory sparsely inhabited, this water had very good quality. While all of these investigations took place, the City Council decided to break the delay and on the 14.September 1895 signed a compromise with Cervini Counts, (the owner of the land where the source dell’Ermicciolo flowed), making sure them not to damage the economic activities located along the steep course of torrent Vivo, who benefitted of the driving power of the water.

The Battistini and Depratti sawmill with the ironworks Franchi (who actually was carpentry), the Mill of Campiglia where they milled corn and chestnuts, together with cerealy and Saggiano mills, were economic activities, mentioned above. In order to accurately document the water quality of Vivo d&#39;Orcia, in May 1903 two additional analyzes were conducted attesting that the water “the water of Vivo d`Orcia is chemically

pure and offers the most enviable requirements at an excellent drinking water, that all of the good hygienic quality combines a mild temperature and the great abundance, authorizes to consider fortunate the city which will be fed with it. “

In 1908 the City of Siena finally begun the construction of the aqueduct of Vivo, allowing Siena to finally have a plenty of home-pure water essential for a decent life, achieving the dream not to drink more from the spoils and from wells, poor and always more polluted water. Actually the time originally planned for the construction was not respected, but it is clear that the unexpected obstacles were many, even for the modest equipment with which the workers were working.They operated with sledgehammers and pickaxes to dig and small winches to lay the heavy pipes, lead to injunctions.

With these few tools were made more than 62 km of pipelines, leak-proof joints, bridges within which run high-pressure pipes, trying to shape forested hills, the territories in the landslide, rivers and land in very strong slope.

The May 15, 1914, at the end of path of 60 km, the first water from the Vivo d’Orcia source arrived at Porta San Macro in Siena and with time the typhus gradually begin to disappear and mortality to decline.

Today the water distribution network, in the service of City of Siena together with extensive areas of neighboring municipalities, is run by the Aqueduct of the Fiora S.p.A. and fed by aqueducts of Vivo and Luco sources, that ware made in the past century by the Municipal Administration of Siena.

Captured in the years 50, allowed us to increase the water resources, which were no longer sufficient to meet the increased needs of the city and the territory, once it served only by the sweet and unmistakable Water of Vivo.